The pickled egg is an acquired taste, but it’s something many of us at the PMC enjoy. That being said, a pickled egg you’d find at a bar doesn’t have much to give it any unique taste. Most of them are jarred with little more than vinegar and some onion. I decided to try my hand at home-pickling to see if I could add some flavor to these smelly snacks.

Proper pickling takes two to three weeks, so I wanted to try multiple recipes at once. This way, if a batch isn’t that great, it’s not a complete waste of time. In this first effort, I chose three different recipes. Since most recipes call for making around two dozen eggs in a gallon jar, I bought two-quart jars so I could just cut the ingredients in half and not have to factor weird fractions into an already unfamiliar situation.

This recipe was given to me by a friend of my dad’s. It’s the only one on the list that doesn’t call for boiling the dry ingredients in a vinegar solution before pouring over the eggs.

I found this recipe on food.com. I have no idea who “Randy” is. I thought it was an interesting mix. The cloves, sugar, and allspice seem like they might take a little of the bite out of the vinegar.

I know a guy who makes great homemade eggs, but haven’t been able to get ahold of him to get his recipe. I figured there was nothing to lose so I decided to blaze my own trail. I modified a dill pickle ingredient list and added a bunch of horseradish to the mix. I’m hoping these come out sour and spicy.

*(It’s too early in the season to find any fresh dill, so I substituted a tablespoon of dill weed.)

I started things off by tastefully laying out all the delicious ingredients.

I read an article on Lifehacker on how to perfectly hard-boil an egg. While this article likely did not have pickling in mind, it made some good points I thought I could put to use. Apparently, if you poke a hole in the shell of each egg, it helps equalize pressure and the eggs cook quicker and more evenly.

Also, you’re supposed to pre-boil the water and carefully add each egg.

Once they’ve been boiling for ten minutes, you dump the boiling water and immediately switch them to an ice bath. This is where I kind of screwed up. I was boiling three dozen eggs so I used a large, tall pot. It wasn’t exactly easy to strain and I ended up dropping it. Several eggs got smashed. But they looked really good and the yolks had a good consistency. So it gave me a good feeling about the quality of the survivors.

I peeled the 30 eggs that made it through the unscheduled smashing. This was probably the worst smelling part of the project. Hard boiled eggshells smell like sulphur farts. The eggs were left in water in the fridge overnight.

With the boring stuff out of the way, I could focus on the tasty ingredients. I sliced my onions and peppers and prepared the dry mixes. I teared up a little bit from slicing the onions. They would not be my last tears of the night.

Now I could move on to packing the jars. Each jar got 10 eggs thanks to my earlier clumsiness, though I’m not sure they could have fit more anyway. I tried to distribute the onions and peppers as evenly as I could throughout the jar.

Since Bob’s eggs don’t require the ingredients to be mixed with boiling vinegar, I combined all the spices and yellow mustard with two cups of vinegar and whisked it until the mustard was evenly distributed. I poured it in the jar and added enough vinegar to fill it to the top. After a few gentle shakes to mix things up, one set was ready.

This next part was terrible. I would advise anyone who wants to try this to do it outside. I covered the pot, had the ceiling fan and rangetop fan going, and had both kitchen windows open and I was still tearing up and coughing. I had a sore throat and congestion for two days after boiling these ingredients. I may have accidentally created a chemical weapon. 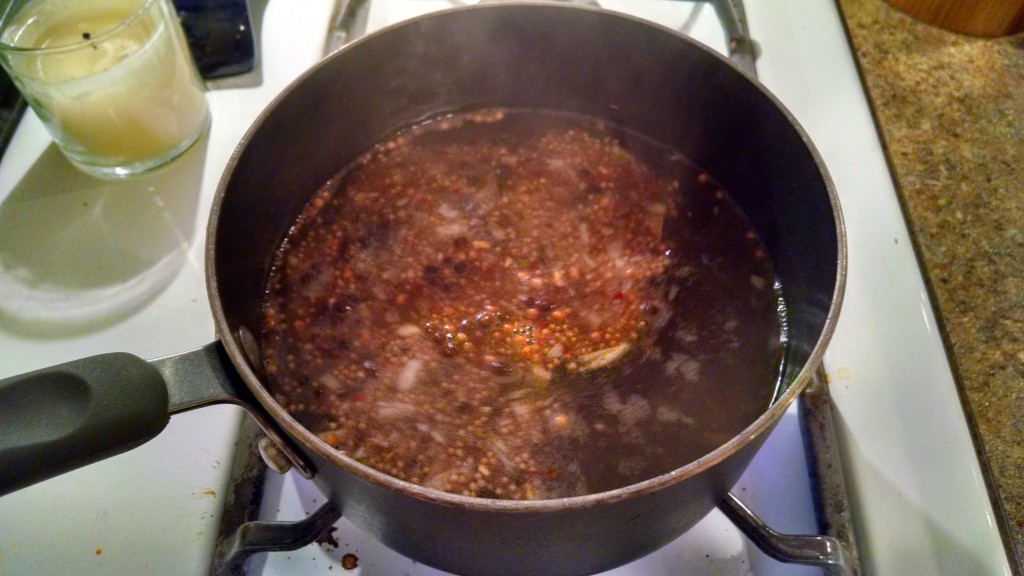 After filling each of the remaining jars with their respective hell-soups, I topped them off with vinegar, screwed on the lids, and put them in the fridge. Once they’ve sat long enough, I’ll post Part 2: Taste Testing.

Here’s hoping they turn out.

Theme by Anders Noren — Up ↑